Typescript from the third draft of Robert Kroetsch's 1969 novel The Studhorse Man.

But to be pronounced insane one must demonstrably not know the nature and quality of one's act.

I know with immodest clarity that by my heroism and concern women were given a kind of immortality which no man can ever share. We die, we men--die we shall (e.g., poor Hazard on his 59th birthday was kicked into rags and pieces by Poseidon, the first xxxx colt born of Martha's five Arabs. He was trying to breed a mare in xxxxxxxxxxx)--die we must, but you women, refreshed and made whole, can lust and fornicate as feverishly as did Martha herself through seven years of being a common law wife and strumpet, growing younger by the year as she, one might almost say, murdered poor Hazard in his own seven beds with her precious
[Text transposed to p. 339]

pussy and then, as did the dear widow Martha also, seizing old age like a bone in her teeth (thanks to the horses that Hazard and I had preserved into the future), enjoying this man and that as the occasion arose, going beyond all decency, prolonging almost at will her infinite and physical pleasures, luring the poor devil young farmers with their mares into her nest of stallions . . . But I cannot, I dare not, bring
[Holographic annotations] 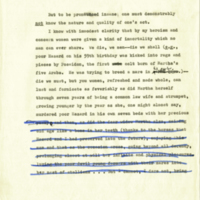